Buyer complaints against defaulting developers have reached an all-time high. Dejected buyers often complain that the local police are not very supportive and invariably favour the builders. With NCR witnessing the most number of complaints, a non-supportive police administration is making home-buyers feel at loss.

In a move to crack the whip on errant developers, Maharashtra Special Inspector-General has directed police stations across Maharashtra to register complaints against developers who cheat flat buyers and violate building norms. The circular has even earned the remark of the Maharashtra CM who termed it as a “good decision”.

Recent steps taken by Maharashtra government have been reassuring. It is the first state to draft rules for Real Estate Regulator and now the circular to file case against defaulting developers is a step closer to help buyers claim their rights. On the other hand, buyers in NCR have to stage protests to make their voice heard but to little avail. But has the state government done anything for assuage the buyers till now? The answer is a clear no.

The Federation of Apartment Owners’ Association (FedAOA) of Ghaziabad has requested Uttar Pradesh DG of Police Javeed Ahmed to issue a similar circular to all police stations in the state to register complaints against errant developers. The Federation made an appeal to the UP DGP via letter.

FedAOA President Alok Kumar says that there is a pressing need for police to act against the developer if a complaint is filed by a cheated buyer. Court cases take too long and in that process builder gets away. “We thought that just like Maharashtra, UP should also issue a circular that’s why we have sent this letter to the DGP so that police can help us in a better way. Police can start investigation under IPC and should check if something is wrong or not. Police can do a lot for us, we give proof but even then there is no action. Many developers have duped buyers and have gone underground” said Alok Kumar. 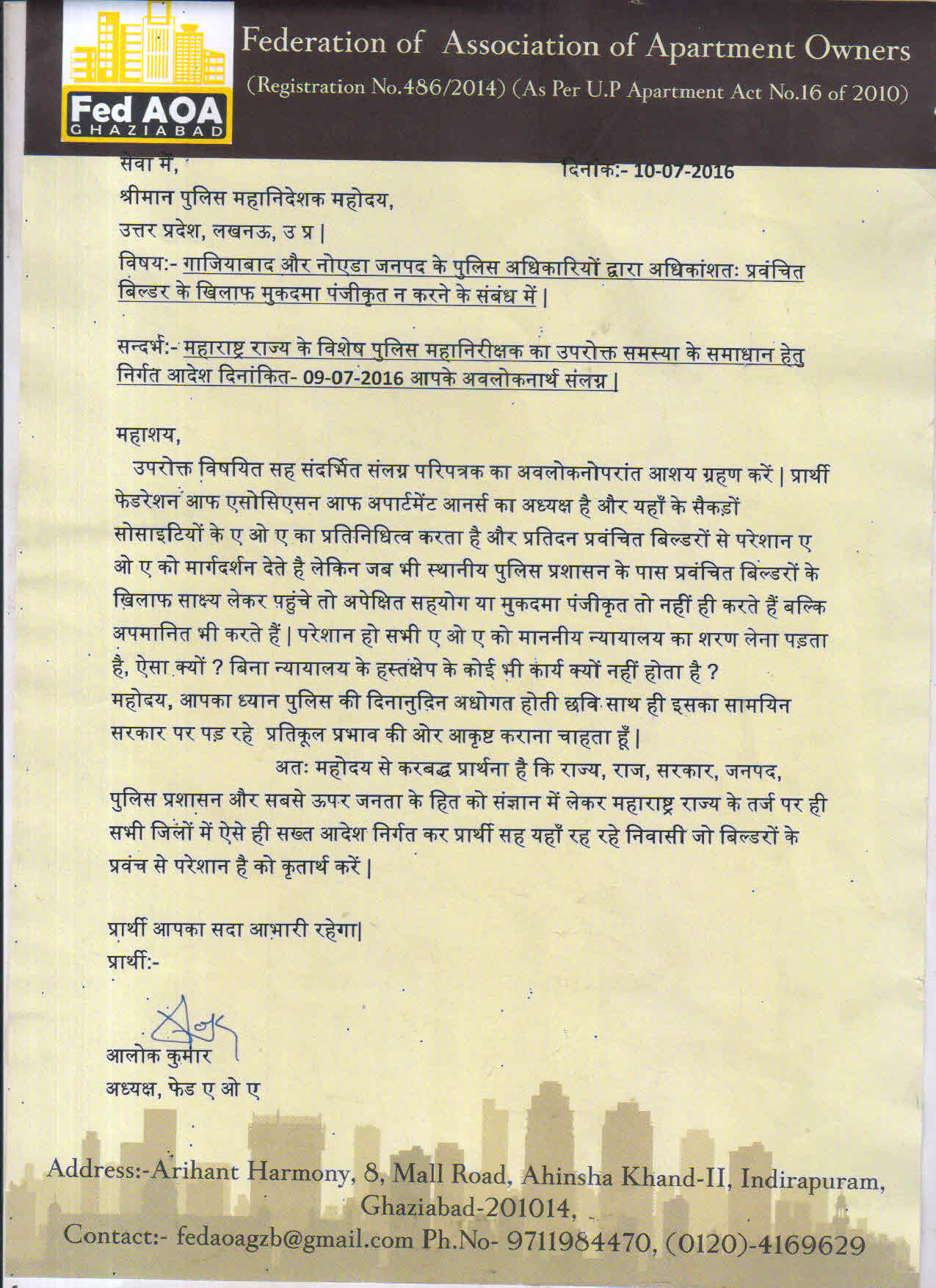 NDTV Property team tried to get in touch with the senior police officials for their response but we haven’t heard back from them.

Legal Loopholes In The Circular

According to Munish Updhyay, Partner at SNG ” This circular will have limitations. As is it the buyer can approach police stations in cases they find criminality in the developers action. Buyers can approach the civil court in cases which is related to the agreement with the developer. Otherwise to invoke criminal jurisdiction in every kind of matter with a developer or housing society is not warranted. I don’t think so the court will allow such a thing.”

Developers in the Noida region feel that such circulars can be used against them and will further create problems for them to complete the projects. Manoj Jain, Director, Saya Homes says that such actions or circular will create a state of phobia among the developers. “Some people can use this tool to blackmail us even when there is no major problem with the project or a flat”

All Eyes on UP Government

Brushing every concern aside, buyers are determined to have this in place. Maharashtra has clearly set an example for the welfare of buyers. Now all eyes are on UP government and police to come out with similar directives and utilize UP Apartment Act to help stuck buyers.

4,551 thoughts on “NCR Buyers Struggle To Get FIR Registered Against Errant Builders”